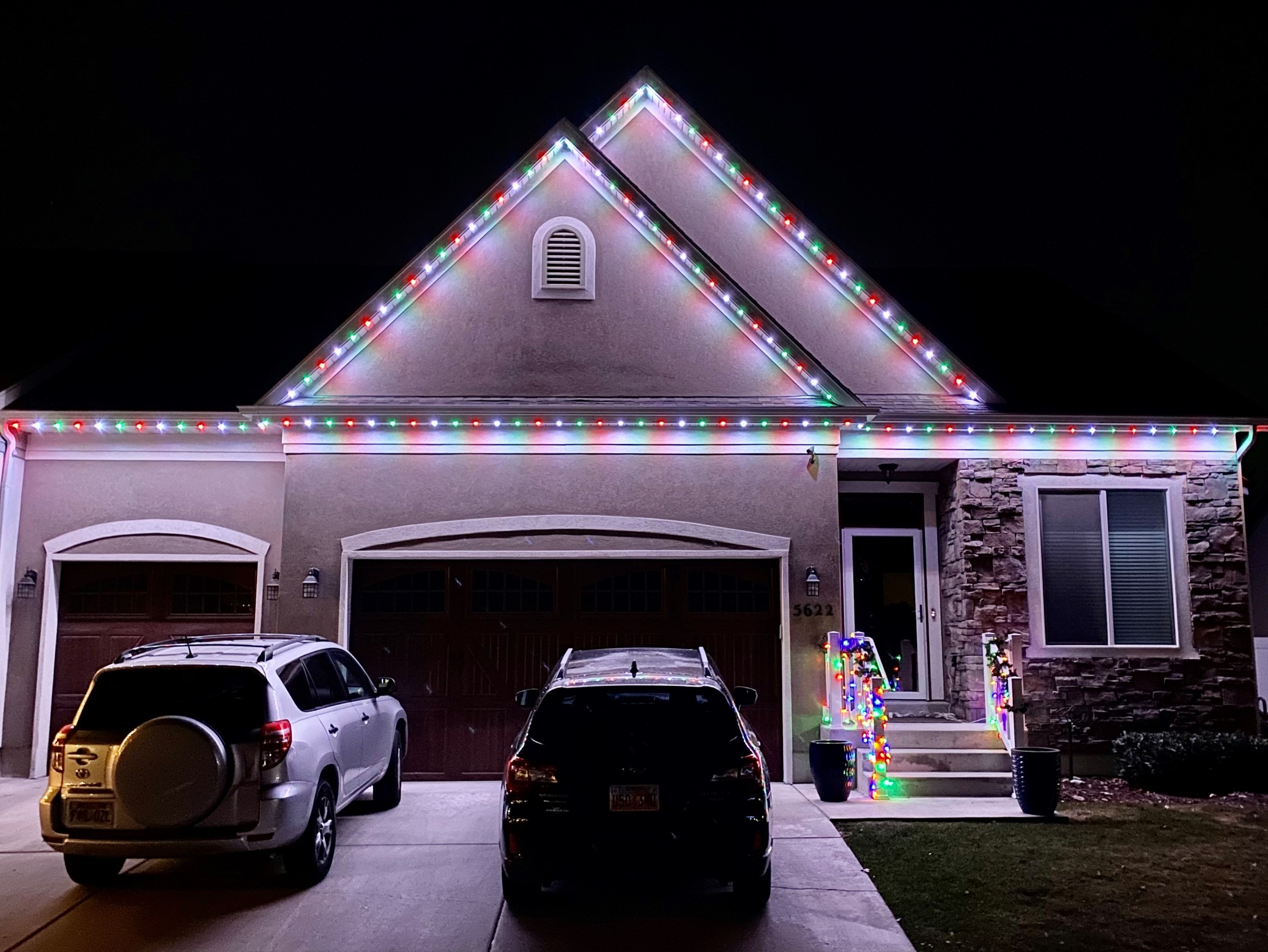 On Veterans Day, besides flying the American flag at full-staff, it is also encouraged to fly POW and MIA flags to show support.

Why is Veterans Day celebrated on November 11th? It goes back to the end of the first World War. While World War I officially ended with the Treaty of Versailles on June 28, 1919, the fighting had actually ended much earlier. 7 months before the Treaty of Versailles was signed, an armistice was agreed on by the Allied Nations and Germany and went into effect on the “eleventh hour of the eleventh day of the eleventh month.” While World War I officially ended on June 28th, 1919, the treaty was signed on November 11th, 1918.

In 1938, November 11th became a federal holiday in the United States to remember and honor American veterans and service members. Initially, November 11th, or Armistice Day, was generally to honor World War I veterans, but after World War II and other wars began, the holiday has been broadened to Veterans Day, which honors all veterans.

What is the best way to celebrate Veterans Day?

There are many ways to celebrate veterans day and show your support for veterans. Most cities will have a parade or another event you can attend to make the day more special. The New York Veterans Day parade is broadcast for millions of people. As one of the most important cities in America, New York puts on a huge light display to show support for American veterans.

Thousands of veterans and volunteers from New York City participate in the parade every year. There are several Veterans Day parades and races you can either participate in or watch and support the people walking and running. Many local veterans will be walking in parades like these, so it is a great place to meet a veteran, hear their stories, and thank them in person for their sacrifice.

Several charities and organizations are also dedicated to helping veterans where you can donate your time, money, and energy. You can donate money to veteran charities to help them deal with the repercussions of their time in the military. You can write letters to military veterans expressing your gratitude, you can volunteer at charities to give your time to veterans.

You can show your support for veterans with a green light display. The color green is a symbol of hope and renewal, and it has become the hallmark Veterans Day salute. Every November, stores around the nation are sold out of green light bulbs after the surge of public support for the greenlight a vet campaign.

Is it common to celebrate Veterans Day by decorating your home?

Many Americans will hang decorations in windows, front porches, and mailboxes to show their support for veterans on November 11th.

Another common Veterans Day decoration is setting up green lights on your porch. The Greenlight a Vet Campaign was started by Walmart as an easy way to express support and awareness for veterans by putting a green light on display in your home. Green represents hope, renewal, and well-being. Green lights can be left on display year-round to show support for military veterans, but it is especially encouraged for Veterans Day to show support to all the veterans.

What type of light displays can I set up for veterans day?

You can do several things for a light show to honor veterans on Veterans Day. A couple in North Dakota was in the local news after they spent months planning a special light display last year, and hope to continue the tradition. The patriotic show features moving red, white, and blue lights and props synced to music. You can set up your own red, white, and blue lights to show your support this November. Besides the national colors, you can set up green lights for a more subtle but heartfelt show of support. Setting up a green light can be done year-round as support for veterans. A red, white, and blue light show that syncs to music is a big undertaking. It can be a bit much for year-round and is better as a fun celebration, while a green light bulb on the porch can be a more quiet but consistent show of support.

How do I install these types of lights?

You can buy lights at any hardware store, or even online. Be sure to get durable, exterior light setups for big light displays. You want the lights to be bright and easily visible from far away. Depending on the size of your home, the quality of the lights, and how elaborate the display is, it can cost between $100 and $1,000 to install lights. You can set it up yourself if it’s simple enough, but the lights and props alone can cost hundreds of dollars.

How can JellyFish Lighting help me?

JellyFish lighting is an outdoor lighting company that designed color-changing LED light displays that can be left on year-round. By installing one light display on your house, you can easily switch between low-key accent lighting, or colorful displays for birthdays, Christmas, Halloween, Fourth of July, Veterans Day, and other holidays or special events. No more putting up and taking down all your light displays every few months. Through JellyFish Lighting, you can set up one display that changes colors to match any occasion.

Our LEDs used have the durability to last for years. We also offer a 1-year warranty on labor and a 3-year warranty on the parts. The lights are easy to replace if one goes out—you can do it yourself, or we can come out and do it for you.

The LEDs are capable of over 16 million colors. You can program any number of patterns and combinations, and the lights can be set to nightly and weekly timers. Create any display you want from one installation! 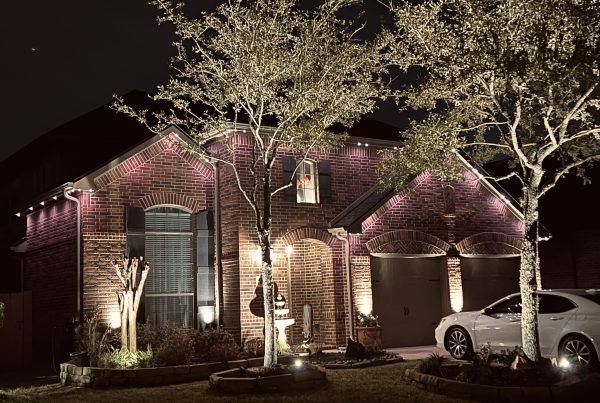 Looking to get a festive head start on the new year? Here are some decoration and lighting tips that might help! How Can I Decorate…
AmpryNovember 22, 2022 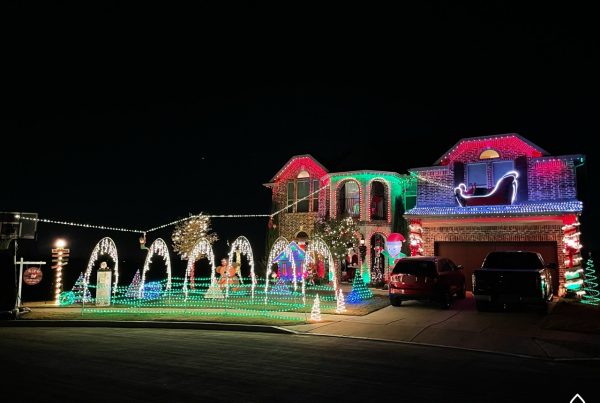 Should I upgrade my Christmas decorations this year? Brushing the dust off your huge box of old Christmas lights and sorting through the strands that…
AmpryNovember 14, 2022 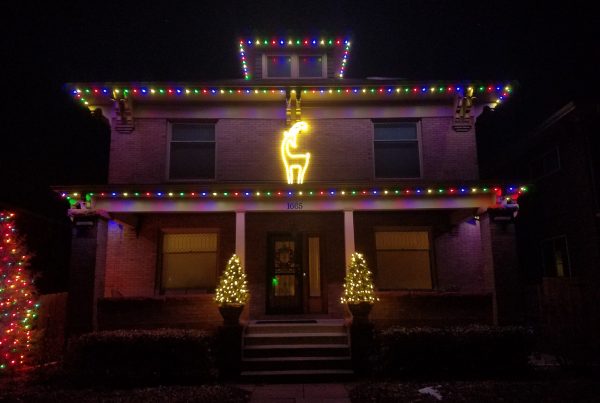 Christmas Lighting Programming for December (and Beyond)

Every neighborhood has a house with stunning flashing Christmas lights that switch from color to color and music to music. Today, we’ll discuss the components…
AmpryNovember 6, 2022
Share Tweet Share Pin